Float fishing is an incredibly popular type of angling that has enough breadth to keep everyone interested.

Though the float fishing technique is very simple, the sheer number of float designs can be more than a little overwhelming to a newbie.

In this article, we will run through the 13 types of fishing floats you should know about and consider including in your tackle.

These floats cover all sizes, types of fishing and conditions meaning you can select the float that is best for the job every time.

Let’s take a closer look at these popular floats!

Just what exactly is float fishing?

Float fishing uses floats of different shapes and sizes for the mid-water suspension of bait. The bait sits on the hook beneath the float that is secured to the line, usually in two places. Using a float prevents the terminal tackle from becoming tangled or stuck on the bottom.

The float visually shows a successful bite to the angler as the float dips beneath the surface.

You can use floats for fishing in still water like ponds and lakes and the moving waters of rivers and seas.

The floats shape, dimensions and buoyancy will vary for different types of fish, bait and conditions. As a rule of thumb, the larger, fatter floats perform best in rougher conditions.

Here 13 types of fishing floats you should know about 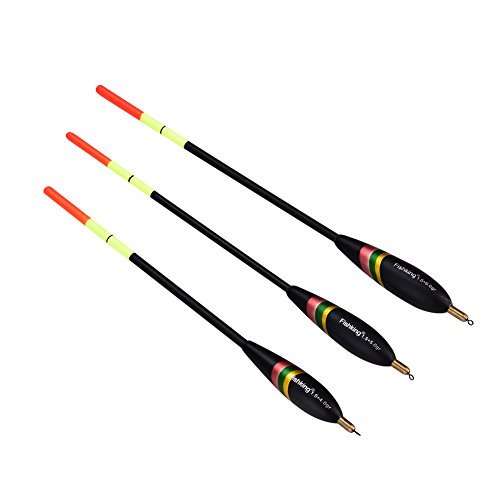 Waggler floats are a diverse family of floats that have the unique feature of attaching to the line only at the bottom of the float. You cast them on the line with your rod and weigh them so only the first centimetre of its length shows above the surface of the water.

Wagglers are predominantly used to fish still waters and until recently were extremely popular in the UK.

They may be straight or bodied and are made from materials including cork, cane, reed and plastic.

This is a classic river fishing float that has earned its name and design from fishing the fast-flowing waters of the River Avon.

Anglers choose this bodied trotter for its strength and stability when fishing running water. The original Avon design was just a cork that has been pushed onto a crow quill, contemporary designs use dense balsa and a stable wire stem. The density of the balsa adds the weight and stability needed for a strong current.

You attach an Avon float to the line at the top and the bottom. You can use the Avon float to present your bait in a variety of ways, but it is most effective when used in water that has a depth of 4 feet or more and in situations where a stick float struggles.

These stick-shaped floats have a tip, an elongated, tapered body and a stem. It attaches to your line using rubbers at the top and bottom of the float. Anglers use them in rivers, streams and any other moving water.

Fish downstream with them, letting the bait hook drift in front of the float by holding back the float so the bait can drift ahead.

A key technique used for fishing rivers with this type of float is called trotting, where the float is held back by pulling on the rod at regular intervals to drift the weight and bait through the moving water at the same speed as the current.

Use bubble floats for surface fishing and do their job when fish are active at the surface of the water.

These floats are simply small hollow balls that can be filled with water to control the buoyancy of the float.

You can cast bubble floats in areas of water where there is dense vegetation that will not permit you to use a standard float. A bubble float will drift into these areas without becoming tangled.

To add a bubble float to your rig, pass the main line through both ends of the float. You will also need to grease the rod end of the line with floatant so it does not become submerged and spook the fish.

Pole floats are an extensive family of fishing floats, with a range of characteristics that are matched to specific angling techniques and conditions.

Pole floats comprise a wire, carbon, or fiberglass stem, eyes for threading the line, and a balsa, cork, or foam body. These floats are usually classified by length and the shape of the body. They include:

The distinctive design of the dink float is like a battery with a cylinder or dark foam topped with a smaller cylinder of cork.

It offers a high level of stability and control; the line is run through the top of the dink, wrapped around its body, and then passes through the bottom.

The pellet waggler is a shorter, thicker float that can be used for surface fishing. They are often used with pellet bait, but can also be used with corn, meat or maggots.

They are very buoyant and usually made from materials like high-density foam or balsa.

This keeps your bait high up in the water and the float does not dive when it is cast. The bait is usually presented to fish like carp in the first two to three feet of water.

There are many styles of pellet waggler, with some designs carrying arrow-like flights to help the float travel through the air straighter when it is cast. Loaded pellet wagglers are weighted and do not need to be rigged with a split shot weight.

Popper floats are also known as popping corks and are named because of the sound they create as your rod moves them through the water.

The splash/pop or chugging sound they create mimics a baitfish species or other creatures (frogs, newts, and insects) feeding at the surface, to lure fish that you can catch. They are effective at attracting carp.

Poppers are made from soft balsa with a swivel screw-in eye and a disc that creates the popping sound. Other topwater popper designs feature metal wire beads, pellets or concavities.

These are traditional handmade fishing floats and some of the earliest known. As their name suggests, these stick-like floats are made from bird feathers, reed or porcupine quills. Types of quill float include:

These quills can also include balsa or cork and are carefully engineered for use either in rivers or still water. You can have a go at making your own quill floats by purchasing a DIY kit or assembling one with collected feathers.

You can use loafer floats in coarse and game fishing. Their size and shape is adequate to stabilize relatively large bait in fast-flowing water and it has a highly buoyant tip to prevent the float from dipping.

They are also known as chunky or “chubber” floats and can be made from clear plastic to be unobtrusive when submerged. Use these floats with bread or pellets to catch perch, roach or chub.

Self-cocking floats are weighted so that they can right themselves in the water. Use them in extremely shallow water that does not have enough depth to suspend a weight to sink your bait.

There are many types of self-cocking float including pike floats, loaded wagglers and pellet wagglers.

Slider floats carry a ring at the base for the line to pass through so they are not locked in position like other floats.

This means that you can use a slider rig for fishing in very deep locations with a large length of line passed beyond the float to present the bait in deep water.

Planing floats, planers or floats with direction control can move the bait by changing the direction of the float by pulling the rod.

A simple tug of the rod produces planing of the float or a flip of direction. You can steer these floats around obstacles like vegetation or rocks and trolled close to structures.

Once you master the basics, you will certainly enjoy the versatility of float fishing.

You can make your own floats, but you’ll find that most types of floats are cheap and cheerful meaning you can experiment with the different types until you find one that works for your style of angling.